Overpopulation is one of the biggest threats in the world; it has now become a rising concern for so many eras. Now, it is almost a global crisis which is being experienced by the people all around. Overpopulation is the conditions where the existing limit of people surpasses on the earth, along with overpopulation is brining much more problem , rising issues like death rates, better medical offices and exploitation of the valuable resources on the earth which is resulting in the overpopulation as well.  Other than that Overpopulation has lead to harm the economic, social, environmental status of the world

As this issue is growing with the days the only way to stop the overpopulation is by creating certain awareness’s among the people, the main impact of the problem is not that earth is lacking enough place to accommodate humans but the main problem it is effecting the growth rate of the world, as well as proving to be harmful for the planets resources.  As per the recent report, overpopulation is said to be doubled by the year 2050, which indirectly make the resources run out faster, increase the expense of the living.

The Causes and Effects:-

There an innumerable cause of overpopulation but the major issues which needs to be addressed positively is the effects of it, the essay will further discuss the causes and effects of it:-

If such abrupt population keeps on increasing then it will hamper the normal system of the environment, it will cause certain problems like food shortage. If it is thought logically, then overpopulation will increase the demand of production of food, there will be more stomachs and mouths to be fed. To match the hunger the developing nation’s food system will collapse and will lead to starvation or else possible war due to tensions of survival.

Increase in the Higher Prices

With the increase of the population, it will require more supply of treatment, medicines, food and other different daily necessities. Once the amount of people will increase on the planet, country or area it will also cause more migration, establishment of the more industries, businesses in order to solve the problem of the supply. Whereas, the more the supply, it will lead to higher rate of prices of the facilities like food, medicines and other different commodities required to sustain the life.

Overpopulation will also increase the pollution, as due to the maximum population more amount of trashes or wastes will be disposed and these wastes needs to be dumped at a place. If the wastes are not dumped properly it will cause water pollution- it will  harm the aquatic life, too much industrial wastes like oil spills in the water, toxic materials which can also lead to imbalance in the food chain.   It will also increase the air pollution due to the extreme amount of release of the chemicals in the air by vehicles and industries. Moreover, excessive emissions of carbon dioxide emissions may also lead to climate changes.

Which is the most over-populated country? 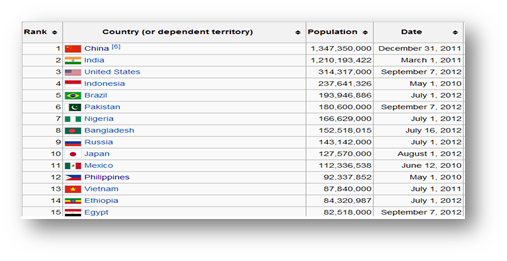 As per the standard report, the most overpopulated country Singapore, Israel, Kuwait, South Korea, Jordan , United Arab Emirates, Japan, Lebanon , Iraq and Belgium. Also, as per the date published in “the ecological footprint Atlas” the world is overpopulated by 2 billion of people.

Other causes of the Population

Measures to Control the population:-

The main thing which can be done to stop the overpopulation is the awareness among the people, the various methods of overpopulation is education; age of marriage bar must be raised, proper family plan. Government by providing the children are free and compulsory training will make them educated enough of the growing consequences of the overpopulations. The “limit of age bar” should be raised like the government should make rules on making the marriage legal in between the age of 18 to 20, 22 years. If age group marriage is postponed it  will decrease the total fertility rate. Many countries lack the knowledge of the proper family planning, so government must ensure a sterilization that will be undergone once the couple has produced two children’s

Thus, overpopulation is the now the most important issue of environmental health, now the greatest challenges faced by the humanity, the above measures and only awareness can lead to control of the increase in the population, otherwise it might lead to food shortage , several pollutions leading to global warming as well. Overpopulation needs to put a control immediately or less the earth will be left out with very limited amount of resources.
You can also take Essay Help from professional writers to write quality essays with proper research.

This is an excellent service provider. Work done before deadline. Quick response for any query. Direct response from expert 24/7....

pretty good overall. it was a team assignment. I felt some of my work was corrected by the team....

I have such a hard time beginning my assignments for fear of not doing a good job on them. This service gives me that push that I need to get my assi...